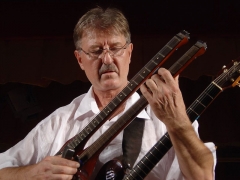 Festive reception in honor of the 20th anniversary of Independence of the Republic of Uzbekistan.

On September 7, 2011in honor of the 20th anniversary of Independence of the Republic of Uzbekistan the embassy of Uzbekistan in Ukraine held a festive reception.

As a part of this event in order to strengthen cultural ties between Ukraine and Uzbekistan "The Development Fund for Crimea" has supported the initiative of the Embassy in a performance of a world famous musician – Enver Izmailov – who was born in Uzbekistan and now is a citizen of Ukraine.

While numerous guests of the reception were listening and watching the performance of Mr. Izmailov they defined his play as "virtuosic, magical and unsurpassed".

The Legacy of Crimea

The website of the Mejlis of the Crimean Tatar people