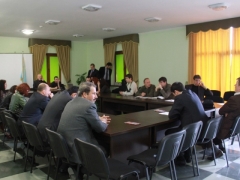 On April 28, 2011 in the convention hall of the "Marokand" took place the presentation of a new official website of the Mejlis. The formation of the site was supported by "The Development Fund for Crimea” with the participation of the International Republican Institute.

"For our young Fund supporting the site of the Mejlis is a great honor and responsibility, because the informational presence of a national part of the Crimean Tatar people in the World Wide Web is a task of a supreme priority, the performing of this task will determine the success of the information policy in general. We hope that the Fund's participation will contribute to this success "- as the President of "The Development Fund for Crimea" has commented upon the event.

The Legacy of Crimea

The website of the Mejlis of the Crimean Tatar people